At each experimental condition, the flame lift-off length, H, was measured as described in Refs. (Siebers, 2001; Higgins, 2001). Time-averaged, line-of-sight images of light emitted from a burning fuel jet at 310 nm were acquired with an intensified CCD camera using a 310 nm band-pass filter (10 nm FWHM). A major source of light emission at 310 nm is chemiluminescence from excited-state OH (OH*) (Higgins, 2000). Unlike ground-state OH, which exists as an equilibrium product in regions of high temperature, OH* is short-lived and results from chemical reactions in near-stoichiometric, high-heat-release regions. Soot luminosity also emits broadband emission with significant emission at 310 nm, but OH chemiluminescence dominates in the lift-off length region where soot has not yet formed (Higgins, 2000). OH chemiluminescence therefore provides a good marker of the lift-off length. Time-averaging of the images was accomplished by starting the camera after autoignition was completed and the tip of the fuel jet passed through the field of view of the camera, and stopping the camera prior to the end of injection, similar to averaging of soot extinction measurements. 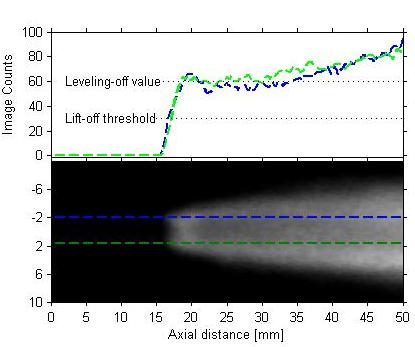 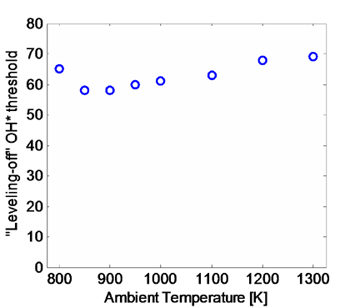 Compression Heating of Ambient Gas– The ambient gas temperature and density in the combustion vessel increase after autoignition and continued fuel injection. The increase is caused by a pressure increase from the burning fuel spray which compresses unmixed ambient gas. These changing ambient gas conditions during injection can cause the lift-off length to decrease with time if the changes are large enough (Higgins, 2000). The pressure rise caused by the diesel fuel injection is typically small because of the large mass of ambient gas in the combustion vessel relative to the mass of fuel injected. Estimates for the change in ambient temperature were made to process lift-off length measurements. The ambient temperature and density estimates were made using isentropic compression and the measured pressure during the time of image acquisition (Siebers, 2001). Two ambient temperatures are therefore given in the database: one before ignition and the other after ignition (Data Def.). Conditions where the temperature rise is more significant include low ambient density (low mass in vessel) or large-nozzle, high-injection-pressure conditions (high mass of fuel injected).