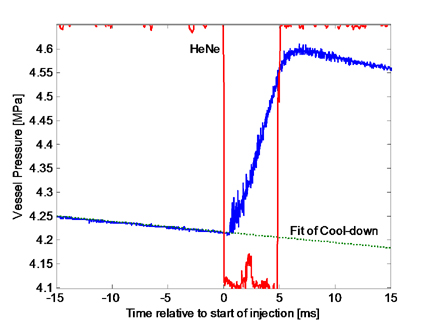 Figures 4.9.1 and 4.9.2 are shown to illustrate these corrections. Figure 4.9.1 shows the combustion vessel pressure relative to the start of diesel injection. The timing of the start and end of diesel injection was detected by measurement of a HeNe laser beam positioned 7 mm in front of the injector tip. The laser beam is attenuated during injection, as shown in Fig.4.9.1. The laser provides more sensitive feedback for the actual injection timing, than electronic inputs to the injector or a needle-lift sensor. The vessel pressure measurement shows that pressure is slowly decreasing in the chamber during the cool-down period prior to fuel injection. A curve fit of the pressure record prior to diesel injection is made to estimate how this cooling trend would affect interpretation of the pressure rise during diesel injection. The difference between the measured pressure and the cool-down curve fit is the pressure rise caused by diesel combustion, which is shown in Fig. 4.9.2. This procedure corrects for the natural cooling of the vessel, but it does not correct for changes in heat transfer caused by the spray after injection, such as jet-wall impingement. 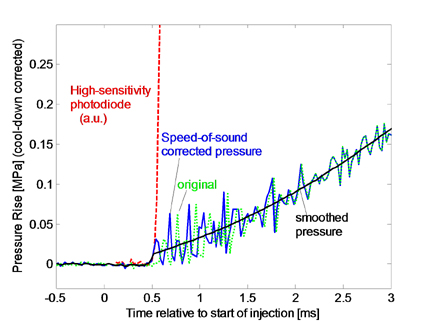 Fig. 4.9.2. Pressure trace from Fig. 4.9.1 after subtraction of cool-down fit and correction for speed-of-sound delay to the pressure transducer at the corner of the vessel. Speed-of-sound correction to pressure shows ignition time consistent with luminosity increase measured with a photodiode

The luminosity and corrected pressure curves show that time from the start of injection until the beginning of the premixed burn, or the ignition delay, is approximately 0.5 ms for Fig. 4.9.2. (Start of injection is shortly before the time when injection attenuates the HeNe laser positioned 7 mm in front of injector). This is the start of rapid pressure rise marking the beginning of second-stage high temperature chemistry, rather than first-stage ignition that precedes the premixed burn. First-stage ignition produces a much smaller pressure-rise (Higgins, 2000).

Pressure traces available to download in the ECN database are the raw pressure rise, the smoothed pressure rise (averaged over the number of injections), standard deviation, uncertainty, speed of sound corrected time after start of injection, absolute pressure, ROHR, and total heat release. Typically, there is approximately ±5% variation (5% rms) in ignition timing from injection to injection.