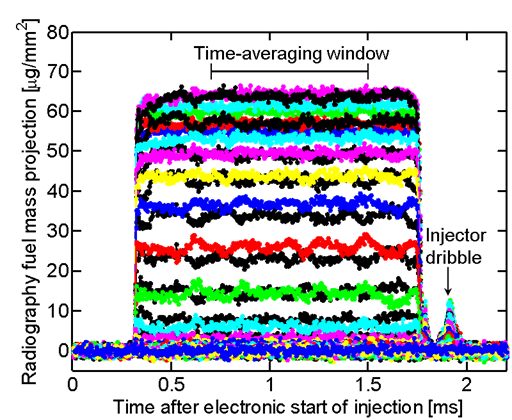 X-ray radiography of the projected fuel mass has been analyzed to derive the fuel mass density and liquid volume fraction in the near nozzle field at Spray A operating conditions, and 303 K ambient temperature. As detailed in Kastengren et al. (2012) and Pickett et al. (2014), a small (5-6 µm) x-ray beam is passed through the fuel spray to measure of the fuel mass along its beam path. A 2D raster scan is obtained with 4 different injector rotations. Time-resolved data from many injections are used to measure the fuel distribution with respect to time, as well as an average during the steady state, as shown in the figure (many radial positions at an axial position fixed at x = 0.1 mm). Tomography is performed to derive local (3D) quantities, rather than line-of-sight or “projection” data.

Tables below provide measured quantities at different positions, with reference to the Spray A nozzle geometry convention where x, y, and z are the axial, vertical, and horizontal coordinates, respectively. The local fuel concentration (density) from the tomographic reconstruction is converted to liquid volume fraction (LVF) by dividing a fuel density of 720 kg/m3 corresponding to the measured temperature of the nozzle of 333 K. Measurements are re-sampled by interpolation to provide intermediate x,y,z values as demonstrated in these rotating or “fly-through” movies.