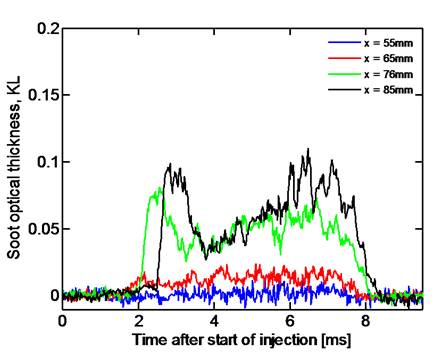 Ensemble-average KL data are available for comparison to modeling predictions in the table below. As shown at the right, the KL increases initially when the spray arrives at a particular location, or when soot formation begins after ignition (e.g. x = 65 mm data). The jet arrival, soot formation, and fluctuation are consistent with high speed soot luminosity imaging for this condition. Although fluctuations in KL are apparent in the figure, these data are actually the ensemble-average of typically 10 or more injections; the few number of injections means that the data are not completely converged to the actual ensemble mean. But there is evidence that fluctuations occur about a quasi-steady mean after the head of the jet passes and before the end of injection. Time-averaging windows were identified (see table) to give a time-averaged KL at a particular position (also given in table). These time-averaged KL were used to derive the soot volume fraction field given above.